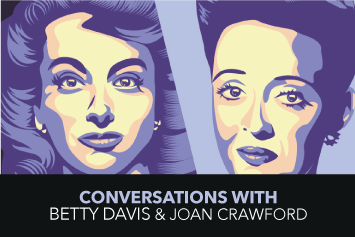 Event Description:
In Conversations with Bette and Joan you will be taken to their dressing rooms during the filming of "Whatever Happened to Baby Jane", the psycho thriller they were offered after the studios considered them washed up has beens. The movie turned into a cult classic but the two women, who had been bitter rivals for years continued their disdain for each other inflicting cruelty on the set as when Joan filled her pockets with rocks so that it would hurt Bette's back to drag her around. Come backstage on the Warner Brothers' backlot for a look at these two stars as they were and gain insight on how they viewed themselves. Starring Tony Smithey and Stephanie Wyatt with guest appearances by Joann Davis and Charlie Poss
Location:
George Link, Jr Gilmer Arts Playhouse
135 Dalton St. Downtown Ellijay
Date/Time Information:
October 8 7pm
October 9 2pm
October 14 & 15 7pm
October 16 2pm
Contact Information:
706.635.5605
Send an Email
Fees/Admission:
$22.
Set a Reminder:
Business Directory Events Calendar Hot Deals Job Postings Information & Brochures Join The Chamber